Ministry of Industry’s Plan to Optimize Downstreaming of Seaweed Industry

The Ministry of Industry continues to encourage increased productivity and competitiveness of the seaweed processing industry in the country, as Indonesia has vast potential to increase the added value of seaweed commodities through industrial downstreaming. “In addition to the need for various strategic policies, strong coordination is required with relevant ministries and institutions to achieve these targets,” Minister of Industry Agus Gumiwang Kartasasmita.

The minister stated that seaweed was one of the leading commodities with the opportunity to be developed domestically on account of its vast availability and ability to move the economic wheels in coastal areas. In a bid to develop the seaweed processing industry, Kartasasmita said his ministry had initiated this sector to be included in the investment priority list.

“Later on, new investments necessitate partnership with seaweed farmers, so that they can increase the guaranteed supply of raw materials for the industry,” Kartasasmita remarked. In addition, the Ministry of Industry continues to encourage optimizing the use of domestically processed seaweed products for industrial users. This effort aims to reduce dependence on imported products. 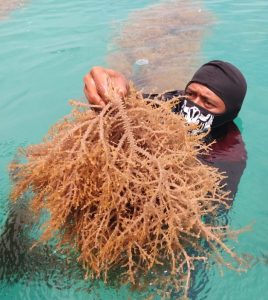 “Furthermore, we are aiming to increase the downstreaming of seaweed commodities through the diversification of processed seaweed products as well as encouraging research and development cooperation with domestic and foreign research institutions for processed seaweed products,” he affirmed. “In fact, this agro-based industry can make a significant contribution to the national economy, such as from the results of its export achievements,” he noted.

Director-General of Agro Industry at the Ministry of Industry Putu Juli Ardika remarked that the exports of processed seaweed products in the form of carrageenan and agar had reached 14 thousand tons, or valued at US$96.1 million in 2020. Carrageenan is commonly used as a food additive for numerous food products. This material works as a stabilizing and emulsifying agent and is often added to dairy products. Meanwhile, agar is usually used as a flavorless vegan substitute for gelatin.

“The market share of processed seaweed, which is quite large, is an opportunity for Indonesia to spur exports, especially if it can increase production volume and product competitiveness,” Ardika noted.

Indonesia is the sixth-largest exporter of carrageenan in the world and the seventh-largest exporter of agar in the world. The export destinations for processed seaweed products from Indonesia are China, the United States, and South Korea. The development of processed seaweed products in Indonesia is backed by the production of dried seaweed that reaches 364 thousand tons per year and is supported by around 40 seaweed processing industries spread across various regions of Indonesia, with a total capacity of 64.9 thousand tons per year.

In an effort to boost competitiveness, the Ministry of Industry encourages industries to utilize the latest technology, through product downstreaming, encourage industrial human resource (HR) competencies, and grow new entrepreneurs or small- and medium-sized industries (IKM) based on seaweed. PT. Kappa Carragenan Nusantara, located in Pasuruan, East Java, is one of the potential seaweed processing industries. The company, with a workforce of 54 people, has a total production capacity of 200 tons per year and its utilization reaches 90 percent. The company is able to meet the supply to industrial users. In fact, their production figure has grown by around five percent.

Processed seaweed products are generally used by food and non-food industries. In the food industry, seaweed-formulated products are used as food additives in bread, meatballs, nugget, syrup, ice cream, yogurt, juice, jelly, and others. In the non-food industry, seaweed can be used for the production of paints, textiles, toothpaste, cosmetics such as lotions, masks, face creams, scrubs, soaps, and shampoos. Meanwhile, in the pharmaceutical industry, currently, processed seaweed is used to manufacture capsule shells. In fact, the waste from seaweed processing in the form of solids and liquids can also be further utilized for fertilizers, plant media, and lightweight bricks.